The only thing unusual about this story is the fact that it ended up in the news. Rape and sexual assault are cornerstones of CIA interrogation procedures and have been so for decades. Hopefully Americans will wake up to the fact that the horrific procedures found in Guantanamo Bay and Abu Ghraib are still occurring but the federal government has, for all intents and purposes, given military and private contractors immunity from legal prosecution. So it's nice to see the occasional exception to that policy.

via:ABC News
Andrew Warren, a former CIA station chief in Algeria, has been sentenced to more than five years in federal prison for drugging and raping a Muslim woman in Algiers, and for illegally possessing a firearm while under the influence of cocaine....Warren, 43, had thought he would get away with the offense because of diplomatic immunity and the victim's fear of reporting the crime. Huvelle did not, however, sentence Warren to the maximum term of ten years in prison.

Warren pleaded guilty to the charges last June, admitting that he had engaged in abusive sexual contact with a woman he had rendered unconscious on U.S. Embassy property on February 17, 2008. He also admitted possessing a handgun during a crack-fueled episode in a Virginia hotel room in April 2010.

...According to an affidavit filed by the Bureau of Diplomatic Security, two women in separate incidents alleged that Warren gave them drinks that caused them to pass out and then sexually assaulted them at his Algerian apartment while they were in a helpless unconscious or semi-conscious state.


U.S. officials also said that a search of Warren's residence uncovered many tapes of Warren engaged in sex with women, including at least one tape that shows a woman in a semi-conscious state. The rest of the article can be read here:
Posted by watching the watchers at 9:36 AM

source:Gizmodo
This mountain of shredded paper taking over several rooms was found inside the Egyptian Secret Police’s headquarters in Cairo on March 5, when hundreds of angry people invaded it. They called this day their Bastille Day.

An enraged population liberated prisoners still in their isolation cells, no larger than phone booths. In the process, they found torture devices, mountains of shredded documents, dozens of computers stripped from their hard drives and a stash of sex video tapes showing famous people—from actors to politicians, both Egyptians and from other countries. The videos were recorded by the secret police in hotel rooms. Nobody knows who stars in them, but I’m sure the world will know about it very soon: 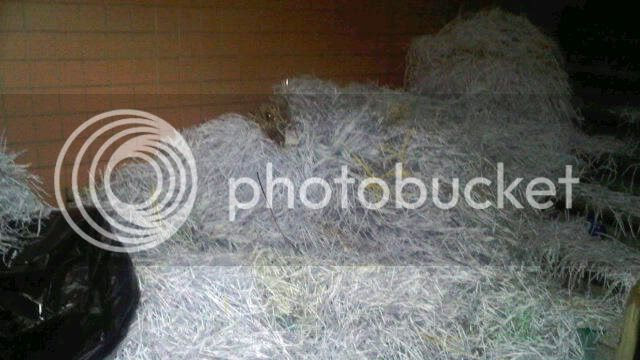 more details from Egyptian chronicles:
This is an inside tour for the capital of hell , first of all the building itself is so huge , too damn huge and it includes many branches ,hospital, officers’ hostel , training and cells underground !! It is like the SS own City Stars !! A historical trivial fact the capital of hell building was designed by Dr. Farouk Al-Gohary of Ain Shams university. His page in Marefara , our own Arabic Wikipedia is negative. According to our friends who went and are still there the building is quite luxurious. We do not exactly how may underground floors are there , some speak about 3 , other speak about 8 !!

Our friends found torture devices , sex films made for famous personalities "this is so Safwat Al Sherif !!" and also Sony PlayStation !! They also found weapons and some CSF officer who was so scared and told them that he was innocent. The officer was handed to the army.
The underground prison was hard to find at first but the people found them. Some were speaking about screams from the underground prison. The cells were found , some people say they were locked electronically but they were opened. The detainees were released after being years in detention , one of them has been released there for 14 years !!!!!!!!!!! The detainees were allegedly blindfold and stayed in small cell without light !!!!!!!!!! Even the military police soldiers and officers were touched.

...An office , a bed room with a bed for two , pink bathrobe , marble bathroom and finest salons for meetings from our own budget , from our own taxes !!
I read a fearful thing online that the citizens found a room full of toys and photos for kids being tortured :(
The documents , files and reports are exposing everybody in the country.
The journalists of course took some scans "and some files" about VIPs including Ex-President Mubarak himself and his activities along with his wife Suzanne Thabet.
Posted by watching the watchers at 5:49 AM