Once again, the research credit for this story goes to Cryptogon.

The latest sex-abuse case to rock the Catholic Church is unfolding in the archdiocese of an influential Italian Cardinal who has been working with Pope Benedict XVI on reforms to respond to prior scandals of pedophile priests.

Father Riccardo Seppia, a 51-year-old parish priest in the village of Sastri Ponente, near Genoa, was arrested last Friday, May 13, on pedophilia and drug charges. Investigators say that in tapped mobile-phone conversations, Seppia asked a Moroccan drug dealer to arrange sexual encounters with young and vulnerable boys. "I do not want 16-year-old boys but younger. Fourteen-year-olds are O.K. Look for needy boys who have family issues," he allegedly said. more...
Posted by watching the watchers at 8:03 PM

courtesy of Cryptogon:
The head of a Catholic religious order in the Netherlands has confirmed one of his subordinate priests served on the board of an organisation that promotes paedophilia.

Herman Spronck, head of the Dutch arm of the Salesian order, said in a statement Friday the priest served on the board of the "Martijn" organization, which is widely reviled but not illegal.
More...
Posted by watching the watchers at 9:15 PM

Go get your reading glasses! (updated with higher quality photos)

It's hard for me to understand how people can dismiss the idea of the U.S. government's involvement in planning and executing the World Trade center attacks given the following series of images. 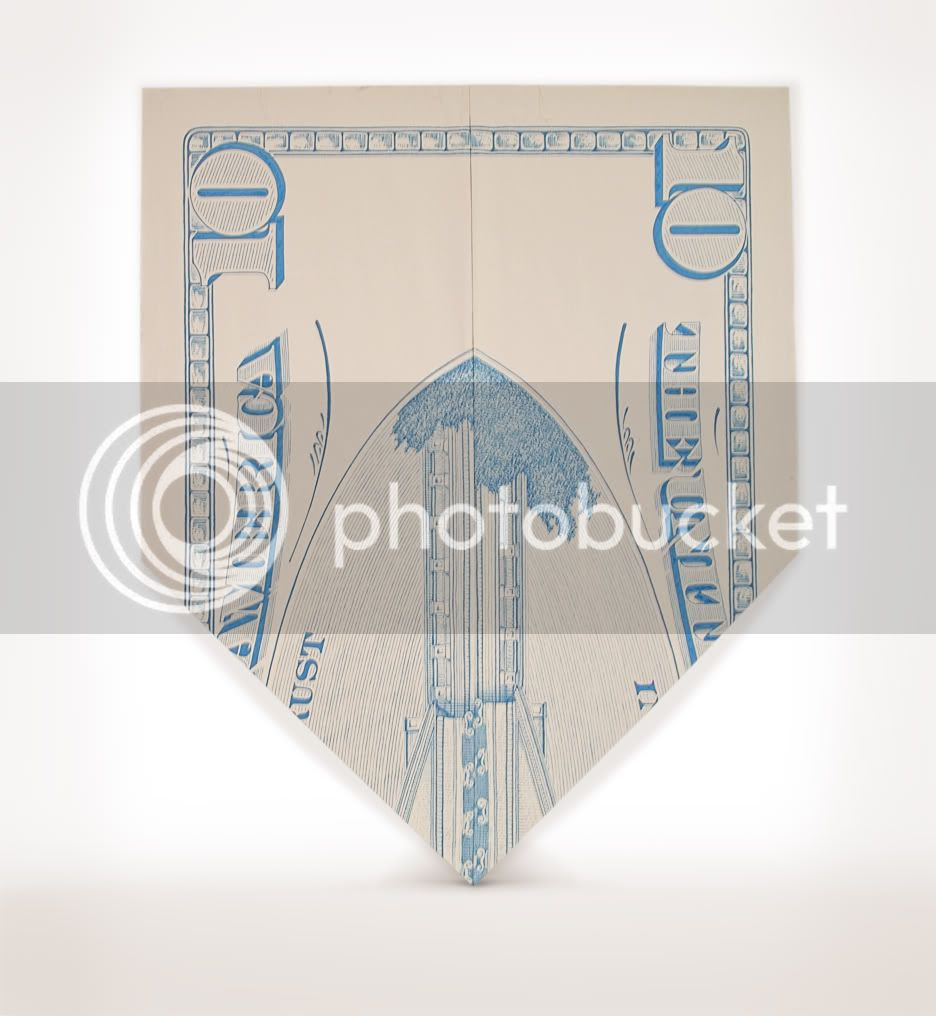 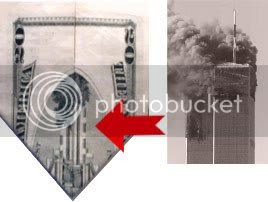 In the images above, we have a series of bills folded into the shape of an airplane, arranged consecutively to show the twin towers as they fall. Even more interesting, many of these bills originated in a redesign of US currency that took place in 1998. Conspiracies.net has a detailed explanation of how to fold the bills so you can see this firsthand. On the opposite side of the $20 bill, one can also see an image of the Pentagon in flames. Here, from world-enlightenment, is a photo of the event portrayed unmistakably on our own currency. 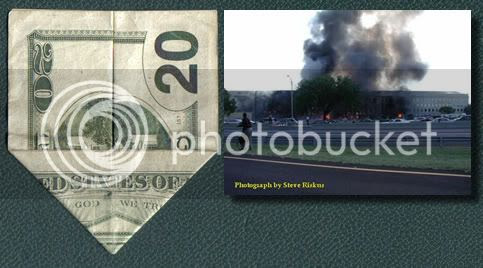 A thorough analysis of 911 can be found at architects and engineers for 911 truth, an organization that has now managed to garner nearly 1500 signatures of verified architectural and engineering professionals on a petition stating that the official version of events is a scientific impossibility. Make no mistake about the information that follows: the people responsible for this crime are murderers who should be brought to justice for the suffering they have brought to so many people. 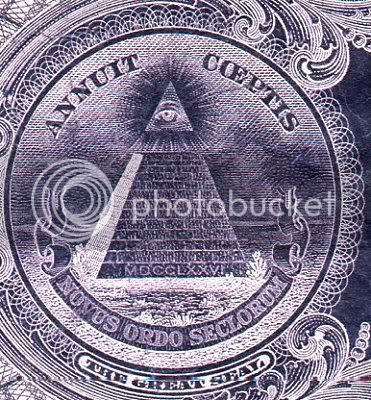 Beyond the obvious, the preponderance of esoteric symbolism on US currency is a subject that should not be dismissed without careful consideration of the evidence involved. Just about everyone who is interested in this material knows about the Eye of Providence which has traditionally been associated with secret societies such as the Freemasons, as well as the banner above the pyramid containing the phrase "Novus Ordo Seclorum" (New Order of the Ages), an occult term that signifies the merging of occultism and the political sphere in the New World Order of geopolitical centralization. The eagle on the dollar also contains 33 feathers, for the 33 degrees within the freemasonic hierarchy that is so important in securing social and political influence for the world's elites. The number 33 also symbolizes the 33 vertebrae of the human spine, an analogy that is relevant because of how the kundalini force travels up the spine during the process of enlightenment. This idea was not lost on the slave-owning Illuminists who founded the country, because the freemasonic lodges that the majority of these ostensibly Christian politicians belonged to made little effort to conceal a deep interest in Eastern mysticism. 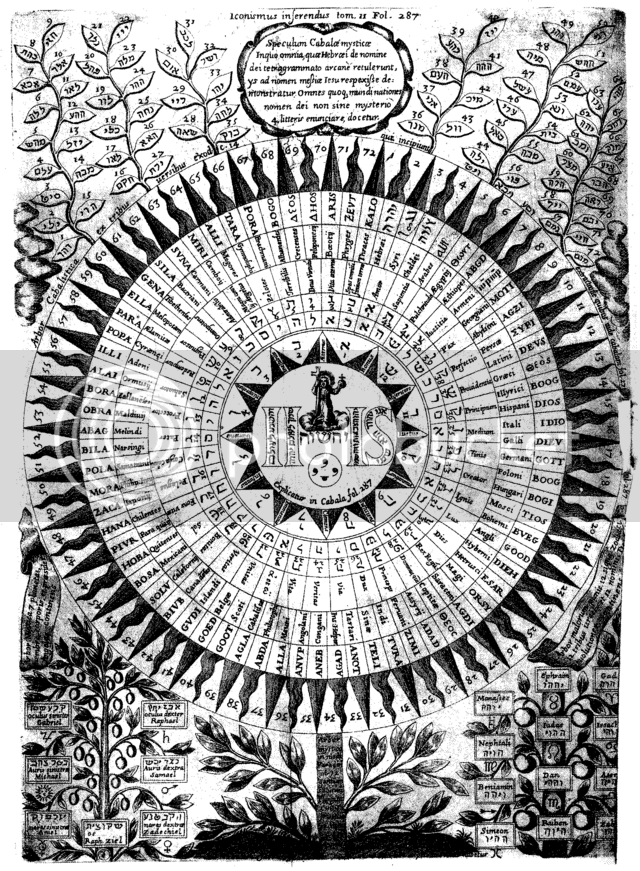 Less well known is the fact that the pyramid contains 72 bricks, an allusion to Shemhamphorash, the Kabbalistic term used for the 72 letter name of God. Kabbalistic sources outline the 72 letters as each referring to an intelligence representing an aspect of divinity. Differing esoteric traditions have assigned these intelligences an identity either angelic or demonic in nature, and sometimes both. According the medieval magickal texts, King Solomon, a key figure in masonic lore, entrapped the beings within a bronze vessel sealed with magic symbols. The 72 deities of the Shemhamphorash also correspond to the names and sigils comprising the Goetia, a system of occult practice that forms much of the basis of both Aleister Crowley's Thelema as well as the theology of the Church of Satan. 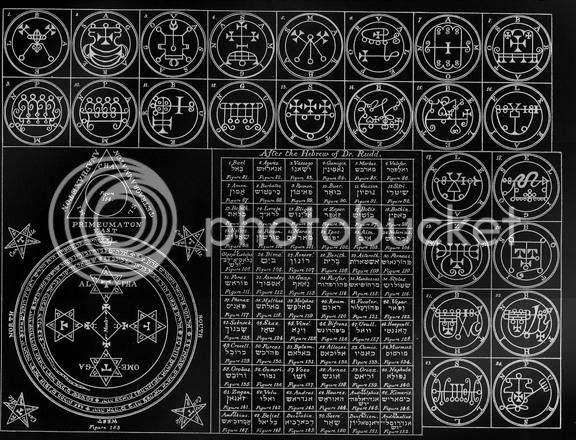 On the other end of the spectrum, philosophically speaking, is the non-profit organization and publishing house Universe/City Mikael, a group of authors, teachers and volunteers who have catalogued a system of the Shemhamphorash used for invoking guardian angels, three of which are assigned to every person according to the day, month and hour of their birth. According to the UCM website, "The mystical texts of The Traditional Study of Angels - Angelology were re-discovered in 1975 after being hidden during the time of the inquisition in Girona (Spain) for more than 500 years. The Hidden Secrets revealed in this discovery lead us to understand that Angels, usually represented as little children with wings, are in reality States of Consciousness that inhabit all of us. Once these Powers are re-activated, they trigger powerful dreams and Revelations both of our past and future."

One of the book's authors was guided to visit Spain after a visionary dream which instructed him to meet with a woman who would hand him a golden key. This woman ended up being a tour guide who, after a series of questions on his part, brought him to a place called The Angels' Garden, where an elderly man had been holding on to the manuscripts, which have now been dated back to 450 BC. These texts are believed to have been guarded by members of the Knights Templar and the Freemasons, groups that have, paradoxically, contained members inclined towards the furthest extremes of both liberty and political, as well as spiritual, oppression. As a financial subsidiary of the Church, the Templars were not exempt from the persecution of the Inquisition, but neither were they innocent of the corruption and greed intrinsic to the upper echelons of religious institutions. It may be that hoarding the manuscripts was yet another way to secure their authority over the peasant classes. As agents of the papacy, they may have attempted to extend this authority beyond the material into a monopoly of consciousness that prevented the autonomous awakening of those who would be a threat to the status quo if the true nature of humanity's spiritual capabilities were revealed.

This information may be disconcerting to those Christians heavily invested in a literal interpretation of the Bible, especially because of the suggestion that Abrahamic faiths are rooted in, and not opposed to, occult and paranormal studies of the same variety as any polytheistic faith such as those that influenced Hermetic Kabbalism and, of course, Christianity itself. The possibility of heretical priests or other anonymous mystics not bound to the orthodox interpretation of Mosaic law being the true source behind the authorship of Exodus is likely not one that fundamentalists of any variety will likely be embracing any time soon. However, this knowledge has opened up another facet to esoteric Christianity, and spiritual study as a whole, so its conclusions will not be ignored by the persistent seeker. 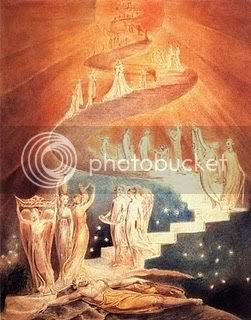 Posted by watching the watchers at 1:03 PM