via Duncan O'Finioan and Miranda Kelley:

If justice is what you seek, then please help us. We are re-posting the letter we sent out a few years ago entreating the various governments of the world and other organizations to address the subject of children being used, tortured, and abused in black government projects.

These projects will not stop unless enough voices are raised in protest against them. Demand investigation, demand transparency, demand that these groups acknowledge and cease these projects immediately. Please feel free to contact your senators, congresspeople, newspapers, and whomever else you feel need to know about this.

We are again hoping that this letter gets widely distributed and is seen by many people. When we sent it out to everyone listed below, we got zero response. Not even the usual “Thanks For Your Feedback” auto-generated email.

We can’t do this alone, but don’t do it for us – do it for yourselves, your families, and your own children who are currently living in a world which allows and sits quietly by while children are abused by the same governments you pledge allegiance to.

We, the survivors of MK ULTRA and all of its sub-projects — Project Talent being
one of them — are coming to you, the leaders of the free world, for redress. We
request immediate action on this matter, as we have waited long enough for our
respective governments to take notice of the torture that was illegally and secretly forced upon us as children by the same said governments. In addition:

We ask for acknowledgement of all that was done to us, both as children and adults, by the governments who committed these illegal acts against us, as well as recognition of duties that we performed for our respective countries in the name of freedom and national security.
We request our files be shown to us.
We request a transparent, cohesive and public investigation into all of the black projects that fall under the umbrella of MK ULTRA.
We request apologies from same said governments for being used illegally and for the tortures we were forced to endure.
We request face to face meetings with the highest officials of our respective countries in order to discuss this matter on a personal level.
We request Congressional hearings in the United States to address this subject.
And finally, we request that all black projects which use children cease immediately.

We feel this is very little to ask in lieu of what was done to us, and what is still being done to us.

You, the abovementioned, are the leaders of the free world. Please stand up and
act like it.

The torture of children can in no way ever be condoned by any country for any
reason. It is our highest wish to have a public announcement that these projects
using children will be stopped.

We respectfully await your replies, if any. We and others have contacted various
government leaders separately in the past and have never once received a reply.
Is this the way governments of the free world react to people like us?

And the People of Project Talent
DuncanOFinioan.com

Posted by watching the watchers at 8:16 AM

CHICAGO (CBS/AP) – After a 13-year-old boy reported in 1979 that a priest raped him and later threatened him at gunpoint to keep quiet, the Archdiocese of Chicago assured the boy’s parents that although the cleric avoided prosecution, he would receive treatment and have no further contact with minors.

But the Rev. William Cloutier, who already had been accused of molesting other children, was returned to ministry a year later and accused of more abuse before he resigned in 1993, two years after the boy’s parents filed a lawsuit. Officials took no action against Cloutier over his earliest transgressions because he “sounded repentant,” according to internal archdiocese documents released Tuesday that show how the archdiocese tried to contain a mounting scandal over child sexual abuse.

For decades, those at the highest levels of the nation’s third-largest archdiocese moved accused priests from parish to parish while hiding the clerics’ histories from the public. The documents, released through settlements between attorneys for the archdiocese and victims, describe how the late Cardinals John Cody and Joseph Bernardin often approved the reassignments. The archdiocese removed some priests from ministry, but often years or decades after the clergy were known to have molested children.
Posted by watching the watchers at 8:13 AM

A former female MP was involved in a paedophile network at the heart of government, police have been told. She is alleged to have forced a boy in care to perform a “vile” sex act at one of a series of drug-fuelled parties in Westminster in the Eighties where boys and girls as young as 13 were allegedly abused.
Last night her alleged victim told the Sunday Express: “I want justice.” Andrew Ash, now 45, said he has given Scotland Yard the name of the former MP. We cannot name her for legal reasons. Mr Ash claims he was frequently ferried down to London from the North of England, where he was in care, to take part in sex parties.

He says they were organised by a paedophile ring involving David Smith, Jimmy Savile’s former chauffeur who killed himself last year before he was due to stand trial for sex offences. He said: “It wasn’t just politicians, there were also a number of celebrities, including Jimmy Savile, who seemed to have a lot of good links to MPs and powerful businessmen. “There was usually drugs like cocaine and speed available as well as bottles of champagne.” Of his encounter with the female MP, he said: “She was extremely drunk and was laughing as she did it. “I didn’t really know what was going on but the others around her were goading her on. “I must have been about 13 years old at the time and felt humiliated.” We can also reveal that security services have been working closely with Yard detectives because of the highly sensitive nature of the allegations.

The Sunday Express understands police seized video footage and photographs of an alleged sex party from a well-known paedophile last year. Mr Ash claims officers have footage which shows a senior male MP in the same frame as him, although no abuse takes place on camera. He said he is speaking out now because he is frustrated by the lack of action after being interviewed for 70 hours by the Met Police’s Paedophile Unit. He says he was abused by the male MP on another occasion too. He said: “I remember being filmed with this MP, who was abusing me in a garage of a very prominent building behind a Rolls-Royce. “Another politician turned up with a video camera but the man abusing me just smirked and joked, ‘OK, OK, I’ll vote any way you want’ as if he was being blackmailed. What I want to know is why they haven’t arrested him yet if they have this evidence. “All I want is justice and for the truth to come out because these people have been protected for far too long.”

Mr Ash said two Met officers called at his home in Yorkshire last May. Interviews were conducted mainly at a safe house in Bridlington, East Yorkshire, but also in London. “The interviews were usually carried out in blocks of three, normally every Tuesday, Wednesday and Thursday. “On at least two occasions there were two other officers present that I didn’t recognise. They didn’t ask me a thing, they just scribbled notes. “I asked who they were but all I was told was that they were from ‘upstairs’. It was clear from the tone that they were intelligence officers. “They had obviously been made aware of the high-profile names and the sensitive information I had given police.” Dutch intelligence officers attended at least one interview because Andrew told of being trafficked to Amsterdam on a number of occasions to be abused by a group of paedophiles including convicted child killer Sidney Cooke.

He claims Cooke, now 84, made him film the paedophile abusing another young boy on video. It is feared Cooke may have abused and killed young boys in the Netherlands. Mr Ash also told police he was abused by a big-name celebrity. He said: “This particular person was able to get youngsters into glitzy nightclubs in the West End. After one evening he invited me and a young girl back to his house where he made us have sex before joining in.” Mr Ash is being helped by anti-abuse campaigners Bill Maloney and Chris Fay. Mr Fay said: “The police have spent a good deal of time with him, listening to his evidence, and now potentially have compelling information that Andrew was at one of these parties with at least one prominent former MP. more...

Also relevant is the following article about the connection between Cardinal Keith O'Brien and Jimmy Savile, who the Guardian reports is a member of the Catholic fraternity Knights of Malta. Savile has been accused by numerous individuals of having participated in ceremonial occult rites that included acts of rape and child molestation occurring in a group setting. Accounts of this activity can be found here, here and here. Operation Yewtree has identified over 450 victims who alleged to having been abused by a child sex trafficking ring connected to Savile. He has also been photographed with public figures including Margaret Thatcher, the British Royal Family, and members of Led Zeppelin. The possibility that Savile may have been involved in an organized pedophilia ring for blackmail purposes seems even more credible considering the social circles he was given access to. 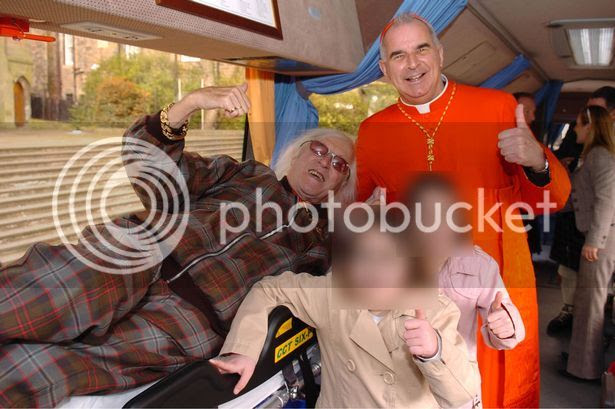 Grinning and giving a thumbs-up, Britain’s most senior Catholic cleric poses with his friend, disgraced paedophile Jimmy Savile. The snap, taken six years ago, emerged last night after Cardinal Keith O’Brien quit amid allegations of “inappropriate acts” towards fellow priests. When Savile’s vile secrets became known, the cardinal called for him to be stripped of his papal knighthood, awarded in 1990. Cardinal O’Brien quit just 24 hours before he was due to fly to Rome to help choose the next pope....His resignation followed a series of recent allegations against him dating back to the 80s by three priests and one former priest.

The ex-priest claimed the cardinal made an inappropriate approach after night prayers at St Andrew’s College, Drygrange. Another said he was living in a parish when he was visited by O’Brien, and inappropriate contact took place. A third accused him of “unwanted behaviour” after late-night drinking. And a fourth alleged he used night prayers as excuse for inappropriate contact...His sudden departure means Britain will be unrepresented in the process as he was the only cardinal in the British Catholic churches...Cardinal O’Brien, who, along with Prince Philip, welcomed Pope Benedict to Scotland in 2010, was no stranger to controversy.
He recently clashed with the Scottish government over its plans to enshrine same-sex marriage in law by 2015.
A year ago he described gay marriage as a “grotesque subversion of a universally accepted human right”.more...


Posted by watching the watchers at 10:28 PM